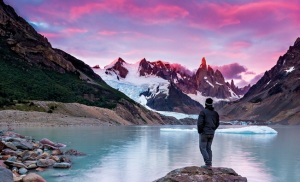 Rich and I are had such a great time on our last trek. This time we headed to Patagonia to trek the Paine Circuit in the southern region of Chile. Since Rich was already in Chile, having sailed aboard the Bark Europa once again from the Canary Islands to Brazil and then from Brazil around Cape Horn (the “Proper Way”) to Punta Arenas, Chile.  I joined him in Chile at Christmas last year to spend most of the month of January traversing glaciers and  highland moors.

The challenge was in getting to Punta Arenas! The air traffic controllers were on strike! After 4 days, however, they decided to go back to work and my flight was rescheduled. I made it there just fine…but our backpacks didn’t.  I had brought Rich’s backpack with me, including our food for two weeks on the trail. Two days later, however, I was able to go to the airport, scrounge around in the baggage area and located the missing backpacks. Now that’ say other story all in itself!

Torres del Paine is absolutely gorgeous! The mountains! The water! The sky! It is a unique place to trek, without he dangers and difficulties of the thin air of the Himalayas. We were pleasantly surprised at the availability of food at several (not all) of the camping areas, so we didn’t have to eat peanut butter and peanuts the full two weeks!

We had hired a porter to carry our four season tent (very heavy) and some of our food for the two weeks. Jaime Ortiz was WONDERFUL! He insisted on carrying our sleeping bags as well. Who were we to argue about this? He not only carried our stuff, but set up and took down our tent each night! Trekking luxury at its finest!

After finishing our two-week trek early, we boarded a ship in Punta Arenas, Chile, to travel to Ushuaia, Argentina, making a stop at Cape Horn Island. Winds are often recorded at 60-70 miles per hour on the island, making Zodiac landings quite tricky and often impossible. It WAS a tricky landing, but well worth the effort. Our hike up to the top of the island brought us every kind of weather imaginable – sun, rain, freezing rain, sleet, snow and hurricane force winds. And a family of four actually lives in a small house there as they watch over the seas around southern Chile.

Next, we zoomed up to El Calafate to check our the mountains, glaciers, and glacier lakes. I didn’t expect much when we signed up to trek the glaciers. Boy, was I surprised at where this trek took us! And kayaking around the icebergs in the glacier lake was incredible!

Make it a point to see this amazing part of the world and meet its fabulous people! 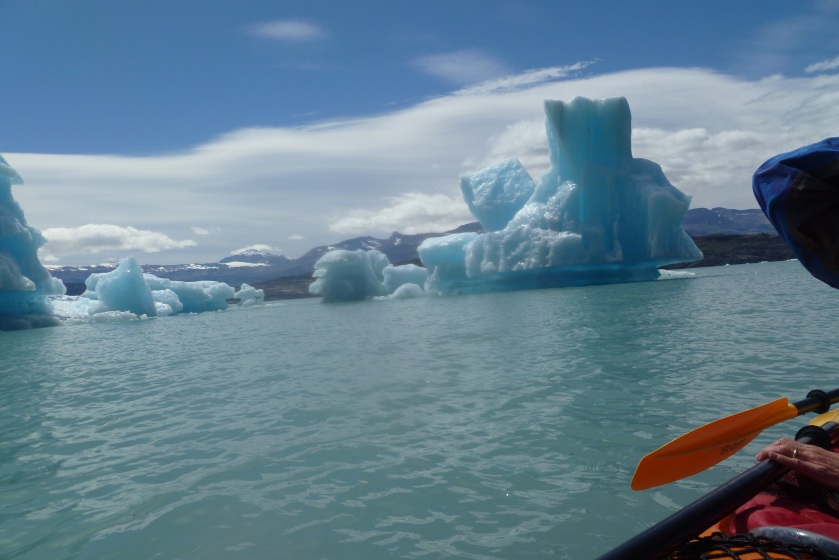